Are you thinking about buying a laser therapy machine?

Laser therapy has enjoyed significant growth in recent years due to important progress and improvements in the laser devices, all tied to the current scientific and technological revolution.

Strong growth has been seen in veterinary science, with numerous laser therapy devices available in the market now. If you are reading this, you are possibly considering the purchase of one of these devices. But what should you bear in mind when choosing to buy a laser therapy device?

When researching the various machines available, we are bombarded with a huge range of characteristics that we sometimes simply know nothing about or only have a vague idea of. Our goal here is to tell you about the various parameters of these devices so you can understand the characteristics of each one and compare them properly.

This is the distance between two successive peaks of a periodic wave in the same phase. It is expressed in nanometers (nm). Alongside power, it is one of the decisive factors for tissue penetration.

The wavelength is also absorbed by endogenous chromophores, with melanin, cytochrome c oxidase and haemoglobin being the most important for therapeutic lasers (Figure 1).

Therapeutic laser works on a range of wavelengths between red and infra-red characterised by their NON-ionising effects.

The ratio at which an energy is emitted, transferred or received, or the efficacy or speed with which the energy is provided. It is expressed in watts (W).

Alongside wavelength, it is one of the decisive factors for tissue penetration. It has been observed that greater penetration is obtained with more powerful machines, with wavelength also being a decisive factor. Based on a definition of the speed with which the energy is provided, it is understood that treatment times are reduced with increased power.

Lasers can be classified according to their power, with the most common at present being the class IIIB laser with a maximum power output of 0.5W or 500mW. Class IV lasers are characterised by exceeding 0.5W or 500mW.

Both classes are dangerous to the eye, both from direct contact and beam reflection. Due to their high power levels, class IV lasers can also be harmful to the skin as they can cause burns. Application techniques are fundamental in avoiding the latter.

Most modern veterinary equipment use class IV lasers. The average power level can be calculated in pulse mode by multiplying the peak power (W), the pulse time (seconds) and the pulse frequency (Hz). 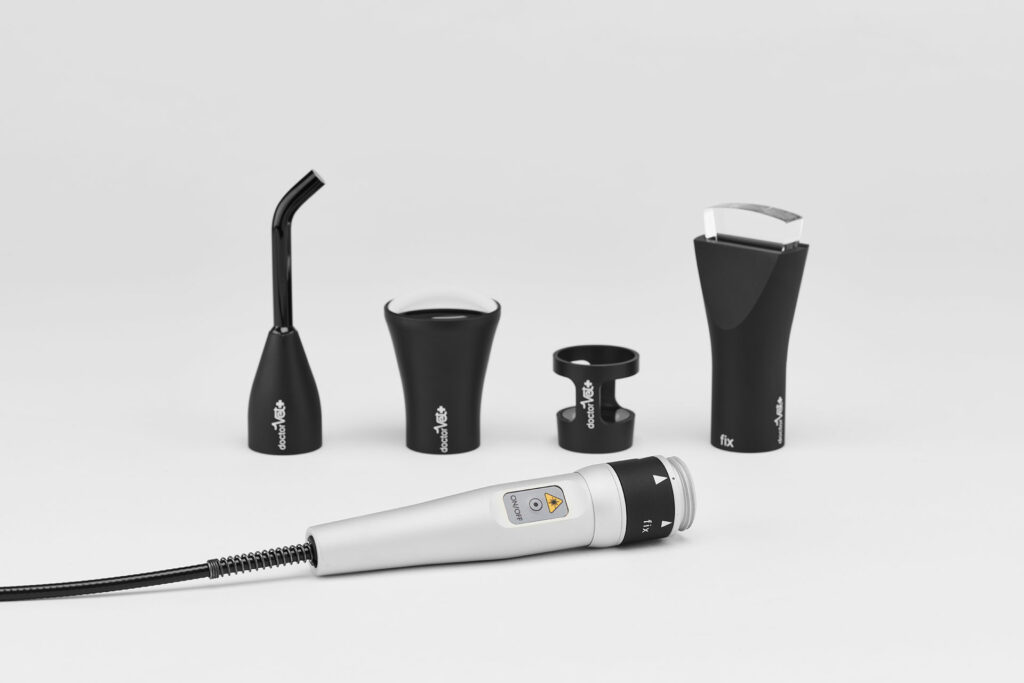 In a pulsed laser, this is the number of pulses that take place in one second, expressed in hertz (Hz).

A laser can also be emitted in continuous wave, which is useful for stimulating microcirculation (one of the most common uses).

The work cycle is expressed as a percentage and indicates the “on” time in pulse mode.

The dose is the amount of energy expressed in Joules per cm2. The dose range is from 1 to 10 J/cm2.

Other pathologies for which a dose increase has been seen are lick granuloma, degenerative myelopathy and eosinophilic granuloma in cats.

Dose calculations are based on measuring the treatment area, selecting a suitable dose based on the above and multiplying the dose by the area to obtain the total Joules.

What are the characteristics of DoctorVet?

DoctorVet is a class IV laser therapy machine, with an average power of 8W and a peak power of 16W.

It offers three wavelengths: 635nm, 808nm and 915nm. It also produces a green wavelength, which is used to remind users about wearing officially approved goggles for vision protection (because this is a class IV laser, it is harmful when coming into direct contact with the eyes or through reflection).

It has a frequency range of 1 to 25,000 Hz. It is based on the tissue density theory. It also has continuous wave technology.  The dose can be adjusted from 1 to 10 J/cm2. 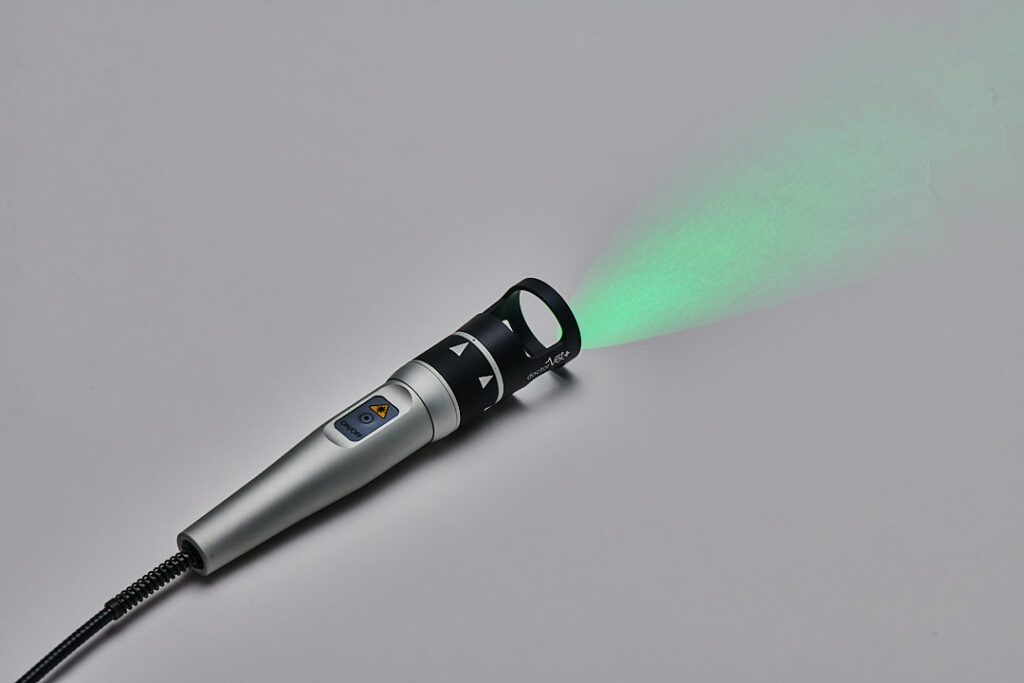 To avoid complex dose calculations based on the patient and the characteristics of the machine, DoctorVet, has created precise protocols based on the afore-mentioned parameters and considering the layer colour, different species and the characteristics of different anatomical areas and conditions. The total Joules for each condition are listed. Each of these protocols has five phases. One of these phases is a continuous wave and the others are different frequencies based on the fact that a wound can affect different tissues.

Furthermore, each one of the phases in these pre-set protocols comes with  DoctorVet software.

Users also have the option to create their own protocols as and when they consider it necessary. With these characteristics, DoctorVet seeks to achieve the photobiomodulation effects offered by laser therapy.