Canine non-inflammatory alopecia (CNA) encompasses various disorders characterised by a loss of hair caused by a problem in the hair growth cycle. It includes endocrine disorders, follicular dysplasia and alopecia after animal shearing. It stems from a problem in the physiology of the hair follicle; in other words, during formation, creating a flaw in its cycle. Alopecia occurs as the hair is lost due to inactivity by these follicles.

Although more and more is being learned about this topic, the factors leading to this pathology are still unknown. Due to this lack of knowledge about the underlying causes, CNA is also known as alopecia X.

Diagnosis must take place based on clinical records, performing a differential diagnosis of inflammatory causes, hormonal causes (hyperadrenocorticism, hyperthyroidism, hyperestrogenism) and other alopecias (such as clinical flank alopecia), as well as after conducting a histopathology.1

At a histological level and despite the lack of studies, wounds appear characterised by disorders in the follicle cycle, observing an increase in the prevalence of follicles in telogen, atrophic. This indicates an alteration to the anagen phase. However, more studies are needed for a correct understanding of this alopecia2. The sebaceous glands are normal and there is no dermal atrophy. 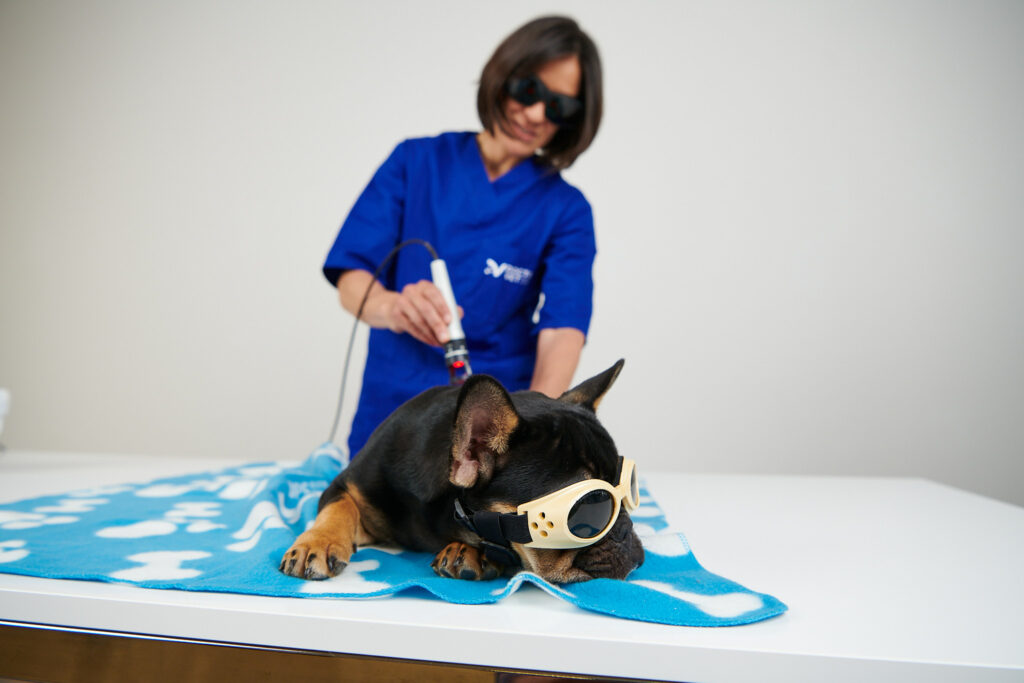 Due to the pathology as a whole, therapy for CNA is quite a challenge. The therapeutic options are castration, melatonin, mitotane, osaterone acetate, medroxyprogesterone acetate, fulvestrant and trilostane.

Considering the first studies conducted by Endre Mester (considered to be the father of laser therapy), in which he researched the effect of laser on skin cancer in mice. He observed that the shaved hair of mice grew faster. The first studies of therapeutic laser arose from there.

Despite the disease cause still being unknown, a study in veterinary medicine was published in the Veterinary Dermatology magazine in 2014 in which the effects of laser therapy on non-inflammatory alopecia were studied. When selecting patients, they rejected those with hyperthyroidism problems and cushing. This CNA was diagnosed from the clinical records and the histopathology of the patients. Seven patients were included in this study and no inflammatory infiltrate was observed in their histology. Two cases presented flank alopecia (presence of kenogen, as well as hyperpigmentation). In another two cases, the alopecia occurred after shaving. In the other three cases, there was no specific histopathology but a follicle size reduction did present3.

In the histological study, it was observed that the number of follicles per area had increased by 93% on the flank treated with laser while this number had increased by only 9% on the control flank3.

Despite the need for more studies to gain a greater understanding of the pathology and how laser therapy can help, this study demonstrated the benefits of laser therapy in non-inflammatory alopecia in dogs.

DoctorVet adapts to this study, for which the open wound protocol is recommended while using the scanner hand tool and adjusting ourselves to the treatment area within the wound zone. The scanning technique should be used. In order to follow the study, the treatment is performed twice a week.