Gingivostomatitis is a chronic process in which the ethiopathogeny is still rather unknown. However, it is known to affect 3.9% of patients in feline medicine1. It causes significant and occasionally proliferative discomfort, affecting all tissues that come into contact with saliva and bacterial plaque, including the gingiva, alveolar mucosa, labial mucosa, sublingual mucosa, palatoglossal arch and soft palate. Its complexity poses a diagnostic and therapeutic challenge.

It is characterised by severe and persistent inflammation and/or ulceration lasting more than six months, affecting the soft tissues of the oral cavity. Pharyngitis and oesophagitis also present in up to 98% of patients. This oesophagitis stems from the release of certain pro-inflammatory cytokines2.

Causes and characteristics of chronic gingivostomatitis

Various factors are involved in the disease, which include the presence of infectious diseases such as Feline calicivirus, Feline herpesvirus, immunodeficiency virus, feline leukaemia virus or periodontal disease. Besides other environmental factors such as stress, cohabitation with a large number of other cats can increase incidence3.

Bacteria play an important role in development of the disease. Patients with gingivostomatitis present a predominance of Pasteurella multocida, as well as gram-negative and anaerobic bacteria. Phylafactor and Peptostreptococcus are also considered to play a role in chronic feline gingivostomatitis4.

In terms of the differential diagnosis, it is essential to differentiate between neoplasia, uremic stomatitis and granuloma. First of all, a correct examination is recommended in order to know which pathogens are involved, followed by haematology and biochemistry (given that 10% of patients with gingivostomatitis present chronic kidney disease5), biopsy and radiology exams.

Multimodal treatment is recommended that includes control of plaque and other diseases, control of the inflammation, use of antibiotics, surgical treatment (tooth extraction), use of recombinant feline interferon omega, cyclosporine, corticosteroids and stem cells. Despite surgery, pharmacological treatment is often needed for the pain and to control inflammation. Many of these patients need treatment for life. 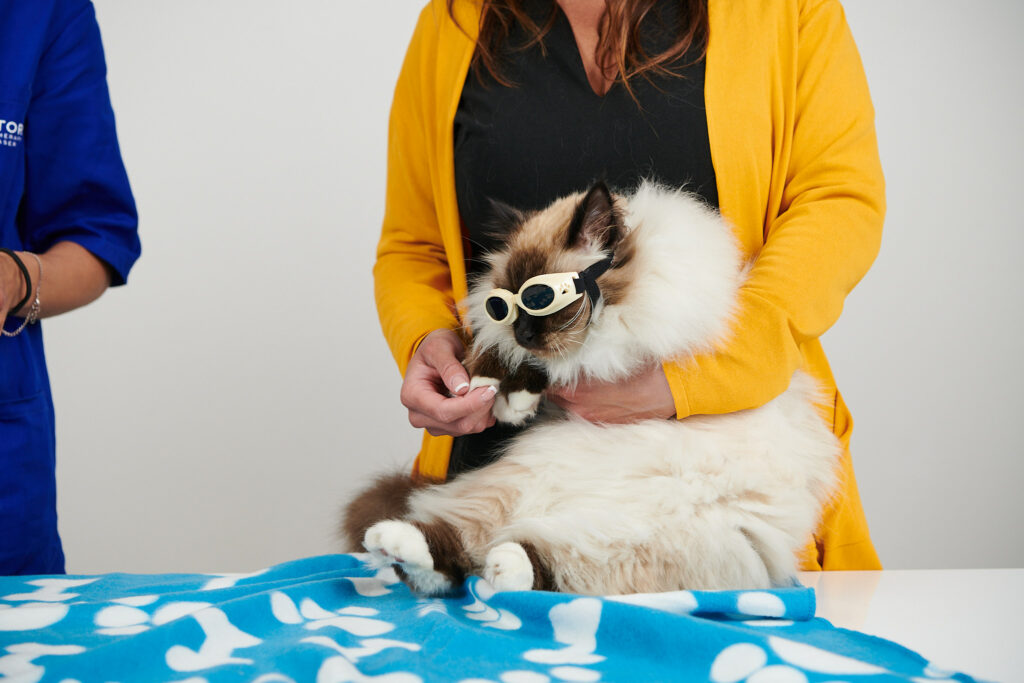 Use of laser therapy in the treatment of chronic gingivostomatitis

Despite the complexity of gingivostomatitis owing to a lack of knowledge about the ethiopathogeny, laser therapy becomes a helpful tool as it can assist in controlling the inflammation, reducing the pain and boosting the healing of wounds caused by the pathology6. It can also help the antimicrobial effect due to the fact that, as stated previously, many of the bacteria involved are anaerobic. With laser therapy, an antimicrobial effect in many anaerobic bacteria has been seen (although more studies are necessary). In other studies, a beneficial effect has been seen in viruses7. The fundamental goal is to prevent recurrence and to reduce the required medication.

DoctorVet is enormously helpful as an adjuvant therapy for feline gingivostomatitis.

Subsequently, the patient can be treated without the need to sedate or open the mouth (i.e., trans-oral treatment with the mouth closed) using the scanner hand tool in non-contact mode by sweeping the caudal zone to the lips, covering the lips and the chin zone to treat the entire oral cavity. The chosen protocols are: inflammation, superficial infection (intra-oral treatment), deep infection (mouth closed), tooth extraction (immediately after surgery), oral wound.

The treatment schedule is 4-5 days at the start of treatment, with subsequent spacing of sessions until a maintenance level is reached. 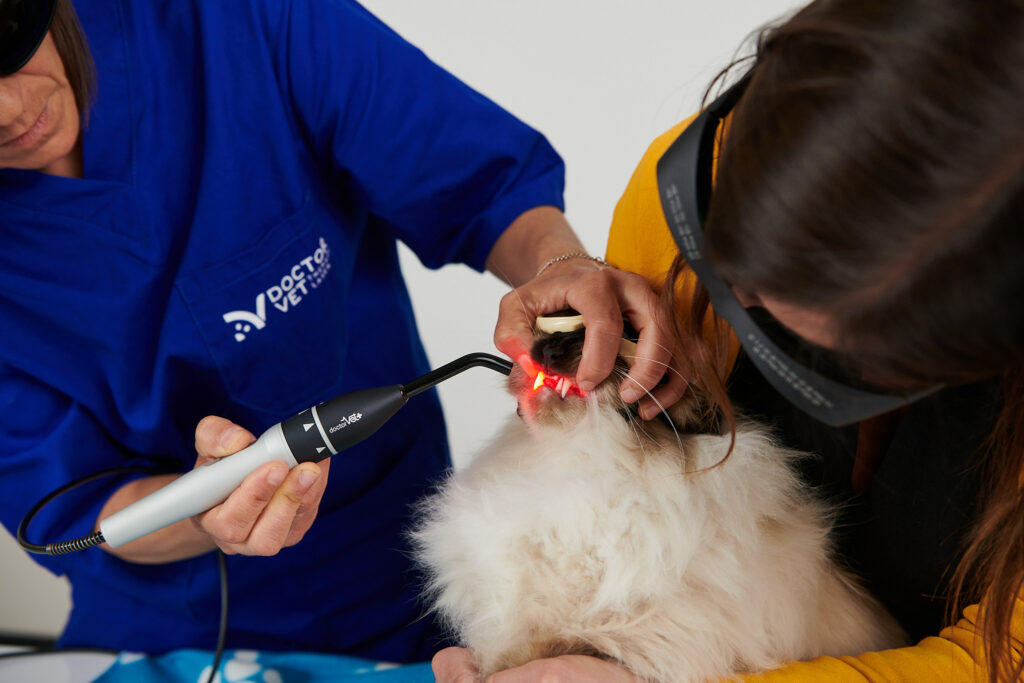