Studies on the power of laser therapy devices

In the previous article, we asked a number of questions about the importance of power and how much to use.

Remember that power is the ratio at which energy is emitted, transferred or received, or the efficacy or speed with which that energy is supplied. Power is expressed in W and it is one of the decisive factors for tissue penetration alongside wavelength. Therapeutic lasers can be classified according to their power, with the most common at present being the class IIIB lasers (with a maximum power output of 500 mW or 0.5 W) and class IV lasers approved by the FDA in 2003 (with a maximum power in excess of 500 mW or 0.5 W). 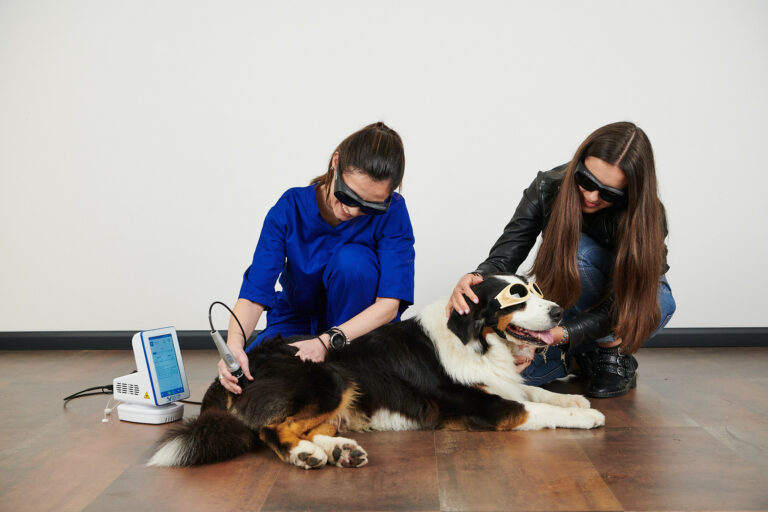 As also stated in the previous blog, increasingly more powerful devices within the class IV laser category are being used in veterinary medicine and this leads to many questions about laser power.

It is indeed clear that power helps us carry the energy (i.e., the photons) to deeper tissue depths, up to a point where the density of those photons (the concentration) is so small that no photobiomodulation effect occurs.

A study conducted by Dr. Bryan Stephens shows how photons behave when they encounter a medium other than air and how far photons can travel based on power.

The study was conducted at three different levels based on the characteristics of the body (Internal Dosimetry: Combining stimulation with phantom and ex vivo measurement, Stephens et al).

The first level of study involved placing a sensor at the base of a container and adding different levels of water, given that the body consists of 80% water. The concentration of photons and the dispersion that occurs in water was studied.

Using a power of 12 W and a wavelength of 800 nm, it was observed that the initial power level was reduced by up to 30% in 6 cm of water. Radial dispersion was also observed in the image taken from the first level.

The second level of the study involved a Monte Carlo simulation. At this level, all the anatomical structures from a magnetic resonance scan of a certain joint (the shoulder) were differentiated. Based on this simulation, the red arrow in the image highlights an output of one billion photons and the behaviour in terms of photon transportation and absorption.

The image of the joint is superimposed with one of photon behaviour, calculating a transmission of 5%.

The third level of the study was conducted ex vivo on six dog cadavers by placing a sensor and observing absorption rates at different levels and in different tissues, including skin, fat, muscle, tendons, ligaments and bones. Significant data were obtained. It was observed that 2% of the energy supplied reached the centre of the joint.

More studies are needed in terms of the precise dose that actually reaches the target tissue. This study is a necessary step towards better understanding how photons behave within the body.

Observation on the effects of photobiomodulation

When reading this study by Dr. Bryan Stephens, we might ask ourselves how it is possible that photobiomodulation effects can be observed at deeper depths and greater distances.

The body truly is a complex structure in which inter-cellular activity plays a fundamental role, including the interaction between irradiated and non-irradiated cells. The release of a large quantity of growth factors leads to a change not only in irradiated cells but also in non-irradiated cells, which causes photobiomodulation effects at a greater distance and deeper depth. We have rather little knowledge about the nature of this interaction due to the complexity of the body, inter-cellular activity and numerous other variables and conditions associated with the body.

Hence, power becomes one of the most important parameters in helping to carry energy to deeper depths and to reduce treatment times.