Osteoarthrosis (OA) or osteoarthritis is a progressive and chronic degenerative joint disease that affects at least 26% of the adult canine population and 80% of geriatric dogs. OA can be primary or secondary. The former appears without the presence of another prior pathology, while the latter appears as a result of another pathology.

A correct and broad anamnesis in combination with a detailed examination and functional assessment is fundamental for proper diagnosis, as well as complementary tests to ensure that diagnosis is correct.

Multimodal therapy is recommended for treatment, which might include pharmacological, surgical, nutraceutical, weight control or physiotherapy and rehabilitation processes.

Due to its high incidence rate and the presence of accompanying diseases that can advise against certain pharmacological treatments, new therapeutic options are always being sought. 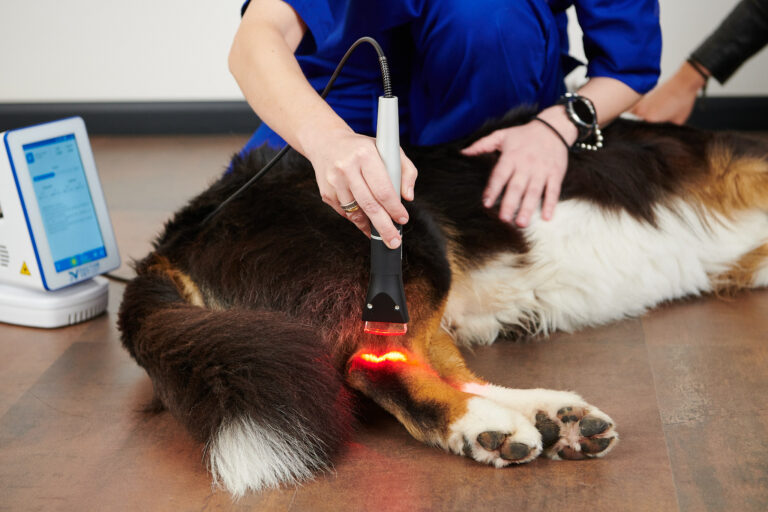 In this search for new therapeutic options, Dr. Andrea L. Looney et al. published a study in 2018 that was conducted on dogs with elbow OA. They believe that the effect of photobiomodulation is closely related to the parameters used, considering that negative or less impactful effects can be produced. Furthermore, the fundamental effects of laser therapy can help patients affected by OA.

A total of 20 patients with elbow OA aged 2-13 years were included in the study (11 dogs in the group treated with laser and 9 in the control group). Examinations of the patients revealed reductions in the range of movement, pain when straightening or bending the elbow and x-rays or CT scans diagnosing OA. The dogs included in the study had been taking non-steroidal anti-inflammatory drugs (NSAIDs) for over a week, presenting a normal hemogram, biochemistry and thyroid values.

Treatment was provided twice per week, reducing the administration of NSAIDs in week three. If a patient’s condition was seen to be worsening at any time, it would have been possible to return to the initial dose of anti-inflammatory drugs. Rescue therapy was also available for severe symptoms.

The laser therapy dose used was 20 J/cm2 with a class IV laser. Treatment was provided twice per week for six weeks.

In terms of the results obtained in this study, it was observed that NSAIDs could be reduced in 82% of cases (i.e. 9 of the 11 patients included in the group treated with laser). Meanwhile, it was not possible to reduce NSAIDs in 5/9 patients included in the control group. An increased dose of NSAIDs was necessary for 2/9 and switching to a different NSAID was necessary in 2/9 to control symptoms in the patient. In terms of the degree of lameness, a significant improvement was observed in the group treated with laser. The same occurred with regard to the Helsinki scale.

Hence, based on the results presented in this study, it was concluded that laser therapy was useful in patients with elbow OA when using a dose range of 10-20 J/cm2 for six weeks, treating twice per week.

Considering the high incidence rate in everyday clinical practice, laser therapy becomes one of the therapeutic options suitable for tackling OA. It can be used as the sole treatment or alongside other recommended therapeutic options for OA, becoming a fundamental tool for approaching this disease.

Furthermore, as the study indicates, it can be combined with the use of oral NSAIDs with no contraindications. On occasions, due to the presence of accompanying diseases, the use of NSAIDs can pose a risk for patients and reduce pharmacological options. Hence why the search for new therapeutic options becomes essential as patients are living longer lives. This longevity implies a search for maximum quality of life.

Laser therapy is a non-invasive technique with three fundamental effects: an analgesic effect, an inflammation control effect and a reparative effect on different tissues.

DoctorVet has specific protocols for each joint and specific recommendations on how to improve application techniques.

“The best thing you can share is knowledge”.
Alain Ducasse